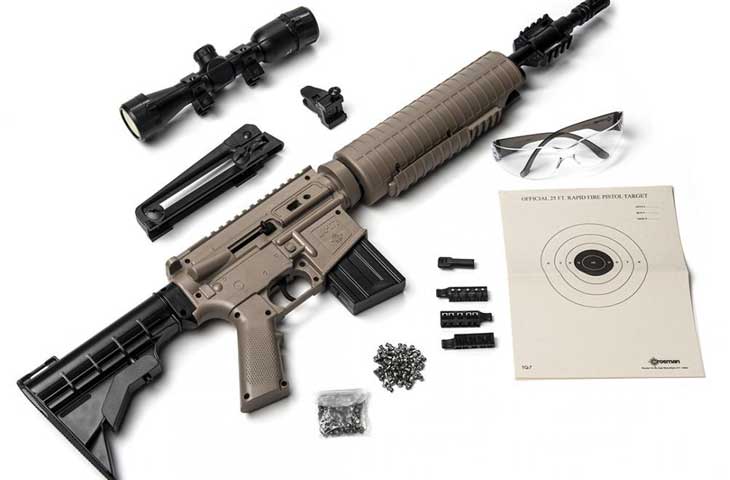 Today the modern pellet rifle has changed a great deal from those built in the last decade. The rifles are advanced in terms of accuracy, carry some very high velocity, and as such produce far more terminal energy down range. These modern air rifles are priced right up with some better grade firearms on the sporting goods market, and often carry just as much if not more engineering.

Like any other American kid I grew up with my Dasey Defender lever action BB gun. It was the greatest, and my most praised possession With a muzzle velocity of under 400 f.p.s the Red Rider BB gun shot up more tin cans, pop bottles, and paper targets then I could ever count.  The rifle taught me the rules of shooting marksmanship skills, and paved the road toward using a firearm by the time I was nine years old.

Currently there are many different brands and styles of air rifles out there on the market. When selecting a rifle the first thing that needs to be considered is the size of your budget. These rifles have moved up in price in a big way, and the high end competition rifles can cost thousands,  Secondly when you have checked the bank account decide on what your going to use the rifle for? Back yard fun guns don’t need to break the bank account, but if your going into  competition class rifles your going to need a better rig because the guy trying to beat your score down the line will be shooting some top end equipment to be sure.

Other factors are dealing with size of the rifle and general fit. If the rifle won’t fit you your wasting your time and again money. In some cases stocks can be custom cut to fit, but if the controls are awkward, or you having trouble getting control of the trigger when trying to get a crisp let off, you need to check some other options in an air rifle for sure.

This AR-15 styled rifle is full sized and retains a dual action with a strong synthetic designed receiver and upper frame,  The R1 is a full automatic fun machine gun that will run through a 25 round drop out magazine that is compatible with 4.5mm steel BB’s.

This is a general fun gun, being a spray and pray system that has no real value in the commercial pest control or other related markets that larger air gun systems are attracted to.

The rifke is fueled by two  12-gram Co2 cartridges, and the muzzle velocity of the rifle is 430 f.p.s.

This rifle can be regarded as useful for skills development when the AR-15 / M-16 is be duplicated in a training scenario.

Moving up onto the real word of operational and lethal air rifles the Marauder is not classed as  a light action BB gun , but rather a weapons system that is powered by air pressure. Be advised even real firearms are powdered by gas , it is just generated by the use of a propellent that is started by fire. . In effect, when the projectile leaves the Benjamin air rifle in .22 caliber it retains some lethal qualities and can hurt or even kill under the right circumstances.

I have associates that work as animal control or pest removal as professionals in major class one city's across the country. They use this type of rifle for indoor work against rats and other pests when other methods are not advised or workable. The .22 caliber air rifle pellet is a deadly tool under the right conditions.

This rifle is semi automatic, meaning it will fire with each pull of the trigger. The receiver retain san ambidextrous charging handle, and the system is regulated for up to 60 shot per reload of the magazine.

The barrel on the rifle is shrouded with an integrated resonance damper attached. The barrel is also rifled for accuracy.

This rifle is a side cocking design that carries a large air cylinder the will allow the fully charged weapon to fire 60 rounds without a refill. The air rifle is designed for hunting purposes, or tasks like pest control, and is not anything close to a basic air rifle at all.

Adjustable trigger, a system that works under 3000 PSI pressure. Makes use of the picatinny rail mount for sights, and retains a  12 shot rotary magazine.

This same rifle can be obtain s in a one quarter bore as well..25 caliber. Up gunned for large animal hunting.

Moving down in price., but staying with game getting energy at the .22 caliber pellet size the bolt acton rifle makes use of the pneumatic air /gas system and will not require a reload ( charging) for 30 rounds.

This air rifle has an all steel barrel, all weather synthetic stock, a set of fiber optic sights, and a 2000 PSA pressure gauge.

This is not a toy, and will deal out massive levels of damage if used incorrectly.

This rifle is built for field use and has a weather fight type overall surface finish. It is a hunting model versus a target grade weapon.

This rifle is expressly set up for target shooting on a competitive level. The rifle is PCP powered and is designed as a three shooting position competition pellet rifle with a precision diopter system.

The rifle is approved by the Air Rifle Council as a three position competition rifle. The rifle is one of the new entries provided by Crosman this year. The rifle shoots the 177 caliber pellet, and can be operated by CO2 or compressed air as duel operational system. This is part of the Crosman PCP energy systems design.

This rifle makes use of the Lothat Walther barrel making it very accurate, a fully adjustable target stock taken from other successful models of Crosman rifles. Keeping mind that Crosmen has been building air rifles sense 1923, they have some experience backing up the design program at Crosman.

The Bulldog is not a conventional air rifle in fact this is a high powered rifle using an air system to function in the field. The rifle is designed for big game hunting, and not target shooting at all. This rifle is been tested on large game animals with some very successful results. If your searching for a heavy hitting in air gun design this is the end of the road as it is right here and now.

This rifle is very short and is of the firearms industry's “ Bull Pup” design standard. The rifle measures a total length of 36 inches, and retains a 26 inch picatinny rail for sight systems mounting.

The rifle is PCP powered and is multi -shot in design. The 357 caliber bullet is just that and lethal for man or beast at hunting ranges. I have watched several hundred power pigs get crushed by this air rifle under real world conditions afield.

The big bore Bulldog packs a big slug in 357 magnum, and makes sue of a baffle less “ Sound Trap”, which is a shroud for big bore sound suppression. I know something about this as I build and sell MetroGun Systems that suppress a 12 gauge shotgun down to a very low sound level. (www.metrogun.com )

The rifle makes use of a reversible bolt that works for both left and right handed shooters, and the side level is also reversible as well.

The gun will shoot 10 shots prior to requiring a new fill of air, and this is ample for hunting big game as in most cases after two shot your wasting ammunition. I shot the system a year ago at the American Shot Show and found it to be effective on heavy steel targets and an interesting way to harness the use of air pressure in a big game rifle category.

This rifle makes use of a break open barrel power design versus the use of compressed air cylinders. This is a never run out of power rifle, but the rifle is a single shot 177 caliber design. That is not all bad in that most use of an air rifle is pest or target work and the pump single shot rifle is very workable under these kinds of requirements.

The Valiant is a do it all general purpose rifle. From paper targets to garden pets the rifle is the one that sits by the back door at the ready to get some work done if required.

The rifle has an adjustable fixed front sight, rifled steel barrel, and a thumb hole style hardwood stock. The trigger is adjustable in a two stage system, and it comes with a Center point 4X32 scope. Remember air rife scope are not the same as those used on standard firearms. They work recoil in a complete reverse of the normal scope tube systems.

This rifle makes use of a steel barrel that is fully rifled, an all weather stock that is composite in design, a two stage trigger that is adjustable, and a center point 4X32 air rifle scope,

As a final example of current air rifle designs the DPMS AR-15 style rifle in an M4 platform and .177 caliber is presented here.

This is a Nitro piston design, and will run up to 1000 f.p.s. action is a break barrel, with a rifled steel barrel installed. Receiver / stock material is synthetic, and sight mounting rail is Weaver. Picatinny style in construction. The trigger on this rifle is a two stage design.

This rifle will give the general look and feel f a military assault rifle. Low cost training is a value regarding this product. or general shooting on paper targets etc.

In reviewing some air rifles in this case be advised that this is just the very tip of the iceberg. Air rifles are international events in some circles, and very good target models can run up into the several thousand dollars. I once shot under ground below a fellows dentist office where he had a two station range with pull targets and special lighting built into the place, He shot every day to ease the stress of his job. His rifles were all in the thousands regarding cost, and every one of them came out of Germany.

It is obvious that many of the air rifle fraternity and know exactly what they want while others have a few things to learn. When shopping for a rifle know your needs well ahead of time. I have the Red Rider BB gun at the front door to this very day for use against stray dogs that mess with my pup every now and again. Won’t hurt them, but they do leave the area in a big hurry.

As you can see by the material discussed above the price range is wide, the product types and styles are many, but the air rifle is a solid working tool when it comes to learning marksmanship skills, and basic training in terms of firearms handling.

I have been writing firearms and outdoor material of over 50 years to date. I have hunted across the world including Russia and a great deal of time professional hunting in Australia. I currently live in the American west and hunt all across the Black Hills of South Dakota, and the Big Horn mountains. I have specialized much of my work as a load developer in shotguns and rifles. I have run a small company that builds suppressor barrels of my design, and load tests for writing purposes and consulting. My commercial names include Ballistics Research & Development / Metro Gun Systems.TM. Web site www.metrogun.com.

Barrettrifles.com is a participant in the Amazon Services LLC Associates Program, an affiliate advertising program designed to provide a means for sites to earn advertising fees by advertising and linking to Amazon.com.

Amazon and the Amazon logo are trademarks of Amazon.com, Inc., or its affiliates. Additionally, Barrettrifles.com participates in various other affiliate programs, and we sometimes get a commission through purchases made through our links.

We do not specifically market to children under 13.