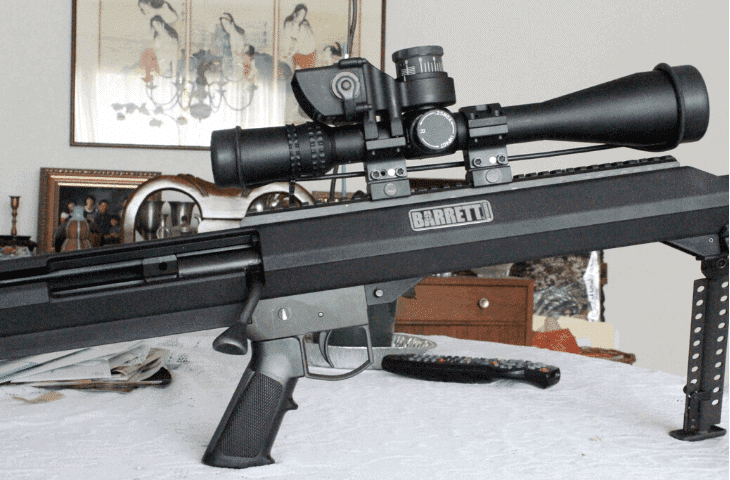 With more than 30 years of experience in guns of impressive firepower, the Barrett Firearms Manufacturing is an undisputed leader in large-caliber rifle design and manufacturing.

The bullpup Barrett M99 is a bolt-action sniper rifle chambered in .50-BMG/12.7x99mm caliber and designed by Barrett Firearms Co. to meet the requirements of the civilian market for an inexpensive but accurate .50 caliber long-range target rifle.

However, an idea of a shoulder-fired rifle chambered in monstrous calibers ranging up to 15mm (.59-caliber) has a long tradition dating all the way back to the late stages of the First World War.

The first a man-portable practical anti-tank weapon suitable for infantry use were developed by germans in WWI and called Tank-Abwehr-Gewehr (anti-tank rifle).

After that, there are dozens of anti-tank rifles developed between two wars that were predecessors of modern anti-materiel or long-range sniper rifles.

Generating very hard recoil on the firer, the rifles of this caliber-range are by no means standard rifles, so the construction bureaus and engineers have invested significant efforts to mitigate the strong recoil caused by big-bore projectiles and very high muzzle velocities.

In practice, those days anti-tank rifles dislocated more than one shoulder or broke collar-bone, so they were often accompanied by the one myth stating some of these hard-kicking rifles could only be fired twice, once from the one shoulder and the other time from the other.

Besides .50-caliber chambering, some of Barrett's large caliber models are also unique by their bullpup configuration usually found in a much smaller-caliber firearm. Certainly, it is not such a modern concept as many people believe. Better-informed gun enthusiasts know that early bullpup firearm designs are related to some bolt-action rifles made at the beginning of the last century such as a Thorneycroft carbine of 1901 and hunting rifles during the fifties but without much success.

Anyway, the main advantage of arranging the magazine and action set aft of the pistol grip unit is that rifles maintain a compact overall length which means better maneuverability and more comfortable transport. With the advantage of a lighter gun, bullpup design keeps the same length barrel with the same accuracy and velocity of a regular rifle.

After their initial success with an anti-material semi-automatic M82, a further development by Barrett Manufacturing led to the bullpup variant called M82A2. Introduced in 1987, this semi-automatic rifle in the "bullpup" configuration was designed to be fired from the shoulder at helicopters. However, this lesser-known production model didn't record a success.

Soon the Barrett's' flagship model, M82A1 became a real hit in the military community as an anti-material sniping weapon for an attack against high payoff targets such as light armored or soft-skin vehicles, parked aircraft and other high-value targets.

However, due to the semi-automatic mechanism and recoiling barrel Light Fifty was only marginally accurate enough for long-range shots against small human targets (like counter-sniper operations) and for detonating explosive devices (EOD) at a safe distance.

Considering all of that, Ronnie Barrett made a proper decision, and by 1990 he released the lighter, bolt-action, bullpup Model 90, a model that preceded the development of bolt-action alternatives to semi-automatic Model 82A1.

The new upgraded version, the Model 95 appeared in 1995 with a number of changes. While the Model 95 retained the same Model 90's magazine capacity of five .50 caliber rounds, the main difference was the M16A2-style pistol grip and a trigger group that was moved forward 1 inch for better magazine clearance. The Model 95 rifle primary application is counter-sniper operations and various U.S. and foreign governments agencies use it.

Although remained mostly available only to military and Law Enforcement personnel, the M95 rifle is also used by civilian competitive long-range shooters across the world.

Initially, the Barrett Model 98-Bravo or 98B was conceived as a long-range rifle for the operators of U.S. Special Forces. In fact, it was a vanguard of today widely used rifle known as the MRAD.

The Barrett 98-Bravo bolt-action rifle represents a slight departure from the bullpup profile and caliber.   The Barrett Model 98B is chambered in .338 Lapua Magnum and it is constructed in an A.R. style, consisting of two halves receivers outfitted with an AR-15 style pistol grip and a fixed stock.

The rifle comes with 27” fluted, free-floating barrel topped with effective muzzle brake. The M98B is fitted with an integral long Picatinny rail on top and a much shorter rails on both sides and under the handguard.

While the legendary semi-automatic M82 Light Fifty was restricted from the civilian ownership and Barrett series of magazine fed bolt action models were still out of reach for many customers who don't want to spend an arm and a leg on a long-range sniper rifle, the Barrett Manufacturing Company on the threshold of the new millennium introduced a Model 99 long-range rifle to the civilian market.

The Ronnie Barrett's son Chris designed the Barrett Model 99 rifle, or also known as a Big Shot in 1999. Since the Barrett's M99 is a single-shot rifle, it is less attractive for military and law enforcement applications. Of course, it doesn’t mean that Model 99 Barrett isn’t called to the frontline of many critical situations by the U.S. Special Forces and law enforcement agencies.

The Barrett "Big Shot” is in use in a dozen countries, where it is prevalent for applications and scenarios when the rate of fire is of less value than the accuracy.

The Barrett M99 resembles externally to the M95, as it is also a bullpup design, but actually, it differs from it in many aspects.

The Big Shot sports longer match-grade barrel made in a heavier contour to ensure repeatable accuracy. The 32-inches heavy fluted barrel is hydraulically pressed and locked into the receiver made of 7000 series aluminum alloy.

While the Barrett M95 comes with two-part stamped-steel receivers, the Big Shot features one-piece receiver made from aluminum alloy.

Like others Barrett's bullpups, the Model 99 rifle doesn’t incorporate open sights. Compared to the older Model 90 that offered shooters a Weaver rail, on the top of the receiver of Model 99 is integrated a heat-treated steel M1913 rail with 27 MOA drop compensation.

Another apparent difference is the lack of detachable magazine. Since this is a single-shot weapon, it means that after each shot, you have to load a fresh cartridge into a shell-holder bolt head manually.

The Model 99 bolt is machined from a single piece of proprietary-grade S-7 tool steel and has multiple lugs. While the M95 bolt sports three lugs, the M99, more similar to an artillery piece, features fifteen lugs that safely lock the bolt assembly into the machined barrel extension.

Along with an AR-15-style trigger group housing, the Model 99 boasts a match-quality trigger design which is not the lightest at the 6.5 pounds. Still, it broke cleanly, making it particularly popular for competitive shooting.

M99 rifle comes with an underfolding integrated bipod by default, which can easily be detached for benchrest shooting.

Lighter yet stronger, at 25 pounds the Barrett Model 99 belongs into the Light rifle class that is a considerably lighter than its counterparts such as the AR-50. The mid-weight of the Barrett rifle and adjustable recoil pad absorbs much of the force, but the massive muzzle brake at the top of the barrel is also designed to catch considerable part of the muzzle blast. Users claim that the felt recoil is quite manageable, comparing it to moderate recoil generated by the hotter .308 Winchester loads.

Since the M99 is built as a high-performance sniper rifle, it's well suited for competition shooting in Big Bore and 50 caliber competitions. This large caliber Barrett rifle exceeds most of the expectation in terms of accuracy and it represents a favorite rifle of many top shooters in long-range shooting competitions.

As for the maintenance, the simple Model 99 comes with only a few moving parts. This uncomplicated weapon can be taken apart for cleaning by pulling out three quick assembly pins.

Not only to effectively harnesses the power of the .50 BMG, but the M99 successfully combining .50-caliber exceptional power with its accurate extended range.

Besides regular 32” barrel length, the Barrett Model 99 offers a more compact version of 29-inch barrel in a shortened overall length of 47”, called the Barrett M99-1. Both models share a hard-core construction, and frame made of 7000 series aluminum and S-7 tool steel bolt, but the M99-1 due to the shorter match grade barrel is more appropriate for urban operations.

I have been an avid outdoorsman all my life. I have hunted and fished most of the Eastern United States for over three decades. During my tenure as a hunter, I have taken most every North American game animal with either a rifle or bow.

Smaller game animals I have taken too many to count. I hunt duck, rabbit, dove, and squirrel every season and take a number of coyote each year which are open season in my area. I greatly miss the quail seasons of my youth but they have all but disappeared across the regions that I commonly hunt.

Barrettrifles.com is a participant in the Amazon Services LLC Associates Program, an affiliate advertising program designed to provide a means for sites to earn advertising fees by advertising and linking to Amazon.com.

Amazon and the Amazon logo are trademarks of Amazon.com, Inc., or its affiliates. Additionally, Barrettrifles.com participates in various other affiliate programs, and we sometimes get a commission through purchases made through our links.

We do not specifically market to children under 13.